Here is an excellent article on the history of Afghan-Americans: http://www.everyculture.com/multi/A-Br/Afghan-Americans.html. In this article, you can read about the history of Afghans settling in America, where they have settled, cuisine, costumes, holidays, health issues, politics, language, and much more. The author, Tim Eigo, lists some of the major settlement areas as: San 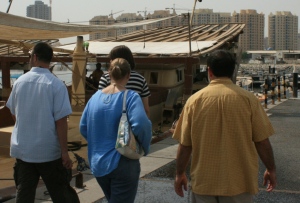 Francisco, New York City, Washington, D.C., and other major east and west coast cities. From experience, I have found a large population in Houston, TX, as well. According to CBS, there is a growing number of Afghans in North Texas, too–http://dfw.cbslocal.com/2011/05/02/north-texas-afghans-concerned-about-backlash-following-bin-laden-death/.

If you’ve identified Afghan restaurants or neighborhoods in your area and you are interested in prayer-walking in those areas, consider reading the book: Prayer Walking: Praying on site with insight by Steven C. Hawthorne.

Also, you may be interested in viewing a video on praying for Afghans through prayer-walking. Click here for some prayer walks done in middle eastern cities that could give you some ideas for prayer-walking in your city.