Ever wonder if your prayers for unreached peoples are heard? Ever wonder if placing a movie in the hands of someone who needs to hear about 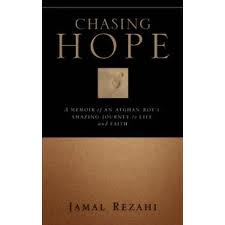 Jesus makes a difference? Several years ago, through a friend of a friend, I was introduced to a family whose sons had fled Afghanistan many, many years past. The boys had traveled across many countries before they were finally taken in by a Christian family.

Throughout their journey, Jamal recalls many times calling out to God, and acknowledging His guidance and protection. In Jamal’s moving story, Chasing Hope: A Memoir of an Afghan Boy’s Amazing Journey to Life and Faith, he writes first about events in his childhood such as:

“But suddenly my brother got really sick – with diarrhea and a very high fever. He could not walk or even lift his head, and was sick for several days. I felt so helpless and did not know how to help him. At night as I prayed I would say, “God, please touch my brother. Mohammed, God, please touch my brother.” Yet in the midst of my Muslim prayers, somehow I thought about the good man that my mother used to tell us about – Isa a Masi (Jesus the Messiah) – and how he walked on the water. That particular night was dark, and somehow when your heart is soft you don’t know what to say. How did I as a child know how to talk to Jesus?” (pp. 44-45)

After fleeing the war zone in which they lived into a neighboring country, he wrote: “We lived in constant fear. I would pray to God about it in my Muslim prayers and ask him to deliver us from this evil and surround us with angels. At times when I prayed, I thought again about the man Jesus who my mother had told us about. Because I loved my religion so much, I sometimes wondered about Jesus and how people who followed him lived, and if they really loved him, not just by their words but by the lives they lived. Even as a little kid hearing that Jesus had walked on the water and healed the blind man, even then I knew that only God could do such things.” (pp. 96-97)

Running through a dark forest, now many countries away from their homeland, Jamal wrote: “As we continued running, people constantly fell down but they always got up again. As I watched the people fall and then find the strength to keep going, each time seemed like a picture of faith …. All of a sudden I thought again about Jesus: this man I did not know; this man I thought was only a prophet; this man my mother had told me so many good things about; this man who gave my heart hope and who I sensed was the Someone with me all the time.” (p. 159)

Finally, toward the end of the story as Jamal and his brother begin living with a Christian, American family living in Europe, Jamal tells the family more about his mother and the person she loves and respects: “What I remember from my mother is that this man walked on the water and helped lots of people. I have tried walking on the water so many times and I keep falling in it, so I don’t try anymore! He was a prophet named Isa a Masi; I think some call him Jesus. In fact, one afternoon when all us kids were home – my mother told us we should watch a movie … it was about this man. Somehow it touched my heart. Since then I feel as if this person is with me all the time, but I don’t know anymore about him. I think sometimes he is worshiped by other religions. And kept telling myself to remember that I am Muslim, and to forget this man, but I don’t know why I keep thinking about him. When I lie on my bed, I think of him, and I know that I can give him thanks every day and minute for what he did, but still I don’t know who he is …. I don’t know where she got the movie. It was just on the shelf. My father used to bring videotapes home from his travels, so perhaps it came to us that way.”

This was the beginning of these two brothers coming to know and love Jesus. Keep praying for Afghans to have opportunities to hear the truth about Jesus the Messiah (Isa a Masi).

One thought on “Chasing Hope”